The Comanche RAH-66 reconnaissance and attack helicopter was being developed by Boeing and Sikorsky for the US Army. The first flight of the Comanche took place on 4 January 1996. The programme entered engineering and manufacturing development (EMD) in June 2000, which required the construction of nine aircraft in addition to the two prototypes by 2006.

The RAH-66 Comanche helicopter project was launched in 1983 and was eventually to have cost more than $39 billion. The Army said it needed a stealthier, more capable armed reconnaissance helicopter not only to collect and distribute battlefield intelligence but to destroy enemy forces.

The armed reconnaissance Block I version was scheduled for initial operating capability in 2009 and heavy attack Block II version in 2011. The US Army requirement was for 650 Comanche helicopters.

Production of the Comanche was to take place at Sikorsky’s new site in Bridgeport, Connecticut.

First deliveries were scheduled for 2006, with the Comanche program reaching full production by about 2010. Plans were to manufacture 1,213 RAH-66s for U.S. Army service. The Army canceled the program in February 2004 as a part of a reorganization of Army Aviation.

The airframe was crashworthy and ballistically tolerant to 23mm gunfire. The radar cross section had been minimised, primarily by the precisely shaped fuselage and internal weapons configuration.

The helicopter has a composite five-bladed bearingless main rotor and an enclosed composite fantail tailrotor for increased anti-torque capability. The rear rotor was able to withstand impact by 12.7mm rounds, and provide an 180 degree turn in 4.7 seconds in hover mode and an 80-knot snap-turn-to-target in 4.5 seconds.

The Comanche was to have two identical cockpits for the pilot and the co-pilot, which are sealed and have a positive pressure air system for protection against chemical and biological warfare. The fly-by-wire flight control system is triple redundant.

The Comanche was supposed to carry its weapons internally.

The Comanche was equipped with two T-800-LHT-801 turboshaft engines from LHTec with a maximum rated power of 1,432shp each. The internal fuel capacity of the helicopter was 1,142l.

Finally, in 2004 the Comanche was abruptly cancelled after over $7 billion in spending, including a half-billion-dollar cancellation penalty. The two prototypes are now displayed the Army’s Aviation Museum at Fort Rucker, Alabama.

Due to constantly shifting and evolving requirements, incorporating the latest cutting edge technology into the airframe during development, quality control failures, and overruns, the cost of the Comanche program was spiralling out of control.

These cost issues, combined with the increasing ability and reliability of UAV to perform the reconnaissance/observation and light attack roles the Comanche was designed to do, was the final stake in the program’s heart.

Bin Laden and after

Stories about America’s Special Operations Stealth Blackhawks, or Stealth Hawks, started making the rounds on the internet, and recently, the team over at The Warzone even managed to dig up a shot of just such a stealthy Blackhawk — likely a predecessor to the helicopters used in the historic raid.

While these modified stealth helicopters weren’t Comanches, the modifications these Blackhawks saw were almost certainly informed by lessons learned in the RAH-66 program. Reports from the scene of the raid also indicate how quiet the helicopters were as the American special operations team closed with their target.

And then there’s Sikorsky’s latest light tactical helicopter, the S-97 Raider. Its visual cues are certainly reminiscent of the company’s efforts in developing the RAH-66, and its performance is too.

The S-97 Raider has been clocked at speeds in excess of 250 mph — faster even than the proposed Comanche’s top speed — and like the Comanche, the Raider is nimble to boot.

The RAH-66 Comanche stealth helicopter may have been a bit too forward reaching for its time, but the lessons learned throughout its development and testing have clearly found new life in other advanced programs.

With defense officials increasingly touting the value of stealth to increase combat aircraft survivability, it seems certain that we’ll see another stealth helicopter enter service at some point; and when we do, it will almost certainly have benefitted from the failures and successes of the Comanche.

The RAH-66 numbered amongst five Army programs that collectively sucked $30 billion in spending without producing any operational systems. At best, the RAH-66 pioneered technologies believed to have been integrated into special MH-60 Blackhawk stealth helicopters used to perform secretive commando missions including the Navy Seal raid which killed Bin Laden.

The Army went on using OH-58D Kiowa Warriors in Afghanistan and Iraq until the type was finally retired in 2017—leaving the Army without any medium scout helicopters. Several attempts to procure low-cost replacements such as the OH-58F and the ARH-70 Arapaho subsequently fell through. Late-model AH-64E Apache Guardians have replaced Kiowas in Attack/Reconnaissance battalions, but have proven a poor fit for the mission. 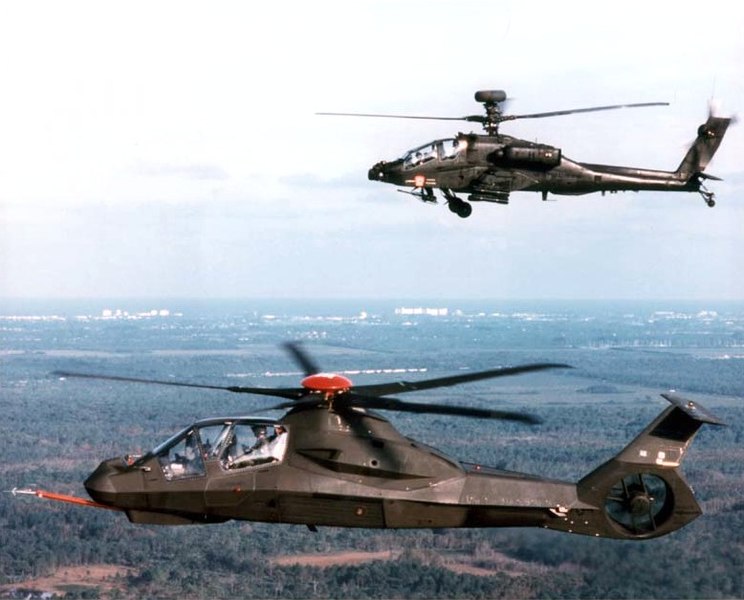 The Comanche program validated a number of aircraft systems and components and built and flew two flight-test prototype aircraft in its demonstration, validation and prototype phase from contract award in 1991 through 2000. The engineering and manufacturing development phase began in mid-2000. During that time, the program was slated to build and deliver 13 new Comanches for additional flight tests and U.S. Army operational test, evaluation and training.

The two protoypes are now in the collection of the U.S. Army Aviation Museum at Fort Rucker, Ala.

Social menu is not set. You need to create menu and assign it to Social Menu on Menu Settings.

You may have missed